Back to previous page

On 4 December, Ostrava's Multi-Disciplinary Arts Centre Cooltour presented a piece with a slightly mysterious title, ANGEL-as (ANGEL-y). An intimate piece for two performers was inspired by angles and everything that related to them, such as various clichés, romantic illusions, religious references, consumerist caricatures of angelic creatures or true symbols of good. 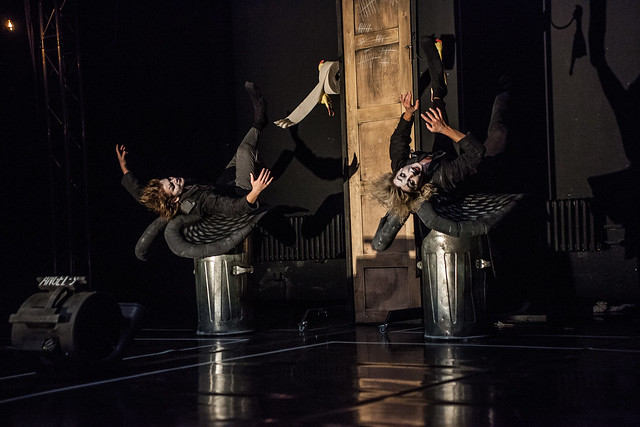 Vanda Hybnerová, actor, dancer and mime, and Lucia Kašiarová, dancer and director of the Alta Studio, put on a pair of angelic wings, enormous shoes and clown make-up and turned into two guardians of the Gate of Heaven who need to kill time while they are on duty and wait for mortals to enter. And what they do is not angelic at all. The two characters – disarmingly naïve as well as darkly sarcastic – try everything from children's games and innocent teasing to simulated suicides that remind us of Waiting for Godot and the famous line "Let's hang ourselves".

At the very beginning of the performance we could here strange, loud, chirping-like sound and the first Angel-a staggered out of the back corner of the auditorium, looking like a hero from Chaplin's movies, with messy hair, crumpled little jacket and large black wings. The chirping came out of a rubber chicken Lucia Kašiarová used as the only sound background for her entrée. When the other Angel-a, Vanda Hybnerová, woke up, the two creatures opened up a dialogue, alternately grasping the leading position. Their little "clown-show" took place by the Heaven's door – which was represented by a down-to-earth toilet door on stage (with a necessary toilet paper roll), with old dust bins on both sides. 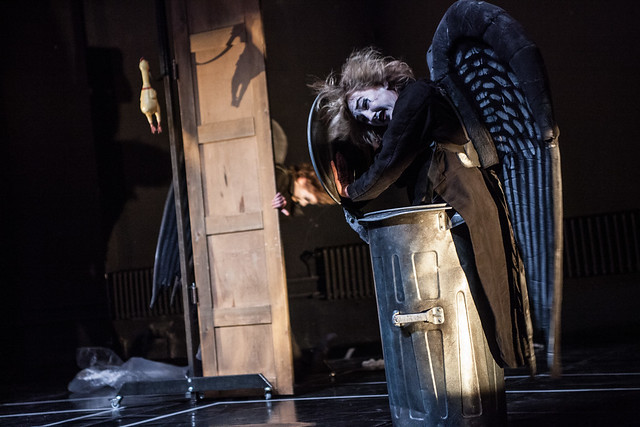 As soon as a sweetish 1990's radio hit started to play, proclaiming love and world peace, the Angel-as' duty began and they had to perform the memorised gestures, regardless of their mood. It resulted in some very funny situations and absurd moments. The performance then continued as a series of sketches, such as an argument over a feather to Gardel's tango Por una cabeza or a parody of Hell Angels, in which the two dancers set off on wild ride on their dust bins. The overall comic tone of the piece was interrupted by rough moments that sent chills down to your spine, just to remind that death, cruelty and anger are omnipresent. In the finale, both angel guardians got rid of their wing – their great burden – and showed the people what they really thought of them.

Vanda Hybnerová and Lucia Kašiarová demonstrated diverse levels of acting, very good technique of mime, movement and dance intelligence which kept the piece at fast pace and charmed the audience. However, some passages were too predictable and gags lost their force and originality after being repeated several times. Using some unconventional sound and visual means, such as the rubber chicken, LED lights, dust bins or a huge fan, proved to be a great plus.

ANGEL-y breathed the mysterious and exciting atmosphere of old attics and crepuscular churches where baroque angels might play the same silly games. Or not. What do we know?